When a mother of a young boy dies suddenly but expectedly, the father goes to great lengths to keep her alive with the son. He records hours of her talking, builds a machine in her bedroom that plays the recording, and hammers the door shut. As the boy grows up, he gets to have a relationship with his mother, who he thinks is a door. The door is as much of a parent as his father, as they play together, eat together, and celebrate holidays together. As the boy grows older, and after he sees his date confused by the arrangement, he grows suspicious. When the father dies, he destroys the door and sees the machine for the first time. He turns it off. Years pass. The boy, now an old man, returns to his childhood home. He turns on the machine and fixes the door. He sits at the door and talks to his mother for the first time in years, and possibly the last time ever. 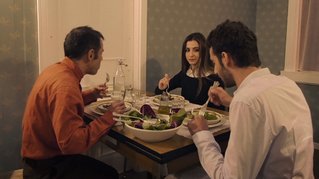 Read the full Q&ADirector Andrea Carrino reveals how a simple request from his mother inspired him to create his film "Wind Back."

PBS: What was the inspiration behind the plot for this film?

Andrea Carrino: I had the seed of the idea one night after I came back from the cinema. I entered my house, there was total silence, all the lights were off and everyone was sleeping. While I was going to sleep I suddenly heard the voice of my mom; she was calling me, asking to turn on the washing machine and I replied through her room door, which was closed. Immediately after that, the concept popped up into my head: a boy who comes home to talk to his mother through a sealed door.

THIRTEEN is one of America’s most respected and innovative public media providers. A member of the WNET family of companies, THIRTEEN is a unique cultural and educational institution that harnesses the power of television and electronic media to inform, enlighten, entertain and inspire.The flagship public television station of the New York City tri-state area and the most-watched public television channel in the nation, THIRTEEN reaches millions of people with programming that celebrates arts and culture, offers insightful commentary on the news of the day, explores the worlds of science and nature, and invites people of all ages to have fun while learning.THIRTEEN’s broadcast schedule features a dynamic mix of programming, much of it created by THIRTEEN which is PBS’s flagship station, including: Nature, American Masters, Great Performances, Cyberchase, and PBS NewsHour Weekend. THIRTEEN also produces a range of local programming, including Reel 13, an on-air, online film series.