The Ties that Bind

Rigorous in its thoughtful self-examination, this personal family portrait details director Diana Newton’s own journey toward acceptance alongside her sister Christine, a trans woman navigating the emotional and physical perils of coming out. Wrenching and eloquent, The Ties That Bind offers an inside look at living authentically amidst one Southern family’s own culture wars.

Diana Newton is the Director and Producer of her recently personal documentary film, The Ties That Bind. The film premiered in April 2017 at the River Run International Film Festival, and continues to screen at festival and community outreach venues. The film was broadcast on PBS’ To the Contrary program’s online film festival in December 2017 and by PBS affiliate UNC-TV in February 2018. Diana previously directed an educational documentary--Change Journey: Facing Terminal Illness(2009)--about managing change based on the true story of a cancer patient. In the past Diana served as President of the Southern Documentary Fund and is currently Programming Director of the Chelsea Theater in Chapel Hill, NC. 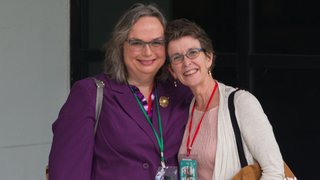 Read the full Q&AAfter completing a 12-year filming process, Director and Producer Diana Newton reflects on her time documenting such a personal part of her family's history.

PBS: Diana, you mentioned that you knew Christine’s revelation would test your family ties and that this was the moment you wanted to begin documenting her story. What was her initial reaction about learning that you wanted to explore this project?

Diana Newton: Christine was, and has remained, very enthusiastic about this film project. That fact often surprises people who have asked me, perhaps because they assume that a trans person might not want their very personal story writ large on screen by a family member. But I think when you have had to hide your real self for most of your life — in her case almost 40 years — being able to tell your story is like finally getting enough oxygen to breathe.

Making the film gave her the space and opportunity to be seen and heard in a profound and authentic way. Which is not to say that it hasn’t been painful for her to revisit some very difficult aspects of her experience of coming out to our family and their responses over time as we repeatedly screen the film. Ironically, the rest of my family members were far more ambivalent about being filmed than she was!

To the Contrary with Bonnie Erbé is the PBS weekly all women’s news analysis program. For more than a quarter of a century, TTC has been dedicated to highlighting the diverse perspectives of women on issues impacting women, children and diverse communities. The nationally broadcast program provides cutting-edge information on topics ranging from women entrepreneurs, women in politics, girls in science and math, family issues, the environment, health issues for women and children globally and nationally and a variety of other. Our panelists and interviewees constitute a diverse array of successful, well-known female leaders from the worlds of journalism, politics, government, business and entertainment. In the past few years TTC launched its About Women and Girls film festival highlighting the rights and struggles of women, girls and diverse communities winners have their programming broadcast nationally on PBS.