"Super Predator: Preludes of the Black Fish" is a contemporary ethnocentric film about the parallels between the predator-prey relationship of a black man facing the prejudicial bounds of society. The black fish is embodied in the shape of the black man, who is vulnerable to being fed on by society. He reflects his underlying qualities and reveals the integrity of his dispositions.

Kelechi Agwuncha is a media student at Southern Illinois University. She served as president of the Big Muddy Film Festival, a premiere national student-run organization. Kelechi is passionate to tell stories that focus on marginalized individuals with an enchanting point of view. Her films have been broadcast on WSIU Public Television and screened in exhibitions including Black International Cinema Berlin, Chicago International Film Festival CineYouth, Langston Hughes African American Film Festival, and Toronto International Film Festival TIFFxInstagram Shorts Festival. As a filmmaker, Kelechi seeks to expose fundamental differences of the human experience. Her cinematic motivations are fueled by investigation of realism and pseudo-documentary. She is currently in pre-production of "Mkpöchi", a film that explores albinistic difference amidst effects of the Nigerian oil industry and the Biafran civil war. She is also producing an anthology mini-series with a filmmaker collective. 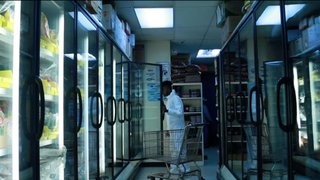 Read the full Q&APBS spoke with Director, Cinematographer, Writer and Producer Kelechi Agwuncha about the creative direction for her film and the messages she hopes to convey through her characters.

PBS: The use of fish, and black fish in particular, is prominent in this film appearing to navigate the role of prey vs. predator in our society. How did the concept for this come about?

Kelechi Agwuncha: So the original story involved a man’s obsession with fish, but fleshing out the story a bit more “the man” eventually transcended to figures of white authority. I was also engrossed by the issue of overconsumption and saw the opportunity to address the topic in metaphorical means relative to myself as an African-American.

Throughout the film you can visually come to terms with the racialized terminology involving “superpredator.” The term superpredator was coined by American political scientist, John J. Dilulio, Jr., in the 1990s to refer to violent crimes involving youth of color relative the 1994 Violent Crime Control Act. The word influenced a negative conscious that a threatening breed of children were designed by a poor/drug-influenced upbringing to cause chaos and murder. The term was heightened even more with news reports that focused on showing mugshots and misconstrued reports of violence by black teenagers. In retrospect, we still see this prejudice today amongst people threatened by and placing negative assumptions on the presence of people of color.

WSIU Public Broadcasting is a vital community resource dedicated to improving the quality of life for millions of people across five states and beyond. We offer multiple digital television channels and radio stations, local production units, community engagement, and interactive online services such as web, podcasts, videos, and social media channels. WSIU provides equal access to news, the arts, culture, science, history and educational programming that inspires learning for everyone. The WSIU stations are a service learning and professional development experience for students of all ages, including more than 100 students of Southern Illinois University who build their media production skills in our stations. WSIU is proud to partner with the PBS Online Film Festival to showcase the creative work of diverse students, faculty, and independent media producers.