Sable Island, a small strip of land less than a mile wide, is home to a near-mythical breed of completely wild horses. Since no human attempts at colonization have ever succeeded, the land has remained unchallenged as a self-sustaining ecosystem. In this short film viewers are transported to the shores of the Sable through a narrator mysteriously enmeshed within the island. Sable is either a graveyard or a sanctuary to its inhabitants, and this film explores the never-ending cycles that make it so fantastic yet daunting.

Drew Doggett is a photographer & filmmaker who focuses on telling the extraordinary stories of places, objects and cultures at risk of disappearing. His practice is characterized by his passion for chronicling diversity and culture while utilizing the discipline he learned working in fashion photography. His work can be found in private and public collections globally, notably the Smithsonian African Art Museum (DC) & the Mariners’ Museum (VA). Benny Nicks is a Brooklyn-based director working in various video forms. His background as a cinematographer & editor informs an approach to filmmaking in which all disciplines are formally intertwined. Ben has collaborated with Usher, James Franco, Daniel Arsham, Justin Peck and others. His lengthy collaboration with Daniel Arsham saw a premier of their short film Future Relic at the 2015 Tribeca Film Festival. Most recently, he directed a narrative film, ‘Hourglass,’ starring Daniel in collaboration with the adidas Originals brand. 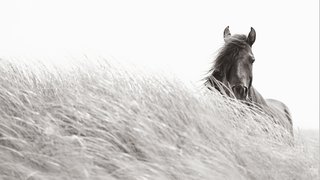 Read the full Q&AInhabited only by wild horses and, at times, researchers, Sable Island is one of the most intriguing places on earth. PBS spoke with Producer and Director Drew Doggett​ about the history of this island and what it was like to film there.

PBS: Though horses live and roam freely throughout Sable Island, humans have been unable to colonize it. We get a glimpse at this with the abandoned buildings on the island and with the number of shipwrecks that have taken place there. Can you tell us more about the history behind this location?

Drew Doggett​: Sable Island has an incredibly rich history - one that is almost too incredible to believe. Beyond its horses, which are just part of the miraculous equation, the island was once used as an experimental prison settlement by the French in the late 1500s. They had given criminals two opportunities: Either they could be executed or try their hand at life on Sable Island. Today, it’s only a home to the horses you see in the film, so you can guess how that went.

Sable has also caused an estimated 350 shipwrecks - the reason being the island’s regular, intense fog and shallow shoals. When the stars were the most reliable navigational tools available to sailors, the dense mist prevented clear vision & lead to many shipwrecks, leading the island to be known as the “Graveyard of the Atlantic.” The horses arrival at the island is also a source of mystery. Some believe they swam there from a nearby shipwreck but it is generally accepted that they were introduced to the island during the 18th century.

Today the only human occupants who live there are a handful of maintenance staff as well as researchers who live there in rotating shifts to study the unique weather patterns enabled by Sable’s location in between the Gulf Stream and Labrador Current. From a zoological standpoint, one of the many reasons these horses are of such interest to researchers is the fact that they have never received modern veterinary care. Their self-contained, preserved way of life — with minimal outside interference — is indeed what has lead them to a thriving existence today.

THIRTEEN is one of America’s most respected and innovative public media providers. A member of the WNET family of companies, THIRTEEN is a unique cultural and educational institution that harnesses the power of television and electronic media to inform, enlighten, entertain and inspire.The flagship public television station of the New York City tri-state area and the most-watched public television channel in the nation, THIRTEEN reaches millions of people with programming that celebrates arts and culture, offers insightful commentary on the news of the day, explores the worlds of science and nature, and invites people of all ages to have fun while learning.THIRTEEN’s broadcast schedule features a dynamic mix of programming, much of it created by THIRTEEN which is PBS’s flagship station, including: Nature, American Masters, Great Performances, Cyberchase, and PBS NewsHour Weekend. THIRTEEN also produces a range of local programming, including Reel 13, an on-air, online film series.