Oglala Lakota Native American Leonard “Leo” Yankton, of Lincoln, Nebraska, tells his transformation from a troubled teen that spent most of his early adulthood in prison to being a Native American activist, international speaker, and entrepreneur. Yankton continuously showed altruistic acts of kindness throughout the community. Then, the controversy with oil pipelines on the Standing Rock Sioux Reservation was at its height. Yankton’s compassion, not only the Native people, but for the well-being of the environment, prompted him to take action by gathering and delivering supplies.

Edmund (Frazier) Myer is an enrolled member of the Chehalis Tribe located in Washington. He grew up in the small town of Onalaska, Washington. He graduated from Washington State University (WSU) May 2017 with a major in communications and a minor in psychology. At WSU, he was the communications assistant for the Native American Programs and he wrote for the campus newspaper, The Daily Evergreen. In 2016, through Vision Maker Media (VMM), he interned with Northwest Public Television (NWPTV). In 2017, Frazer interned with VMM in Lincoln, Nebraska, and worked with award winning Documentary Filmmaker Charles “Boots” Kennedye (Kiowa Tribe of Oklahoma) on a short film “A Redemption Story”. He’s now a reporter for the Chehalis Tribal newsletter. 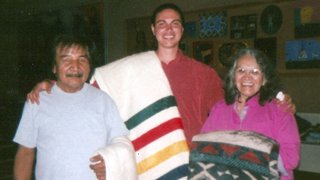 Read the full Q&APBS spoke with Filmmakers Charles Kennedye and Edmund Myer about hearing Leo Yankton's story for the first time and how it has impacted their lives and others around them.

PBS: When did you first hear about Leo and his story?

Kennedye: I first met Leo at an assembly discussing Indigenous cultural and water right issues at the University of Nebraska in Lincoln. He was the keynote speaker and his presentation ranged from Standing Rock to his speaking tour of Europe. I remember being impressed on how well spoken he was and when we first shook hands he recognized me from Facebook. We quickly became friends and I asked him to do some PSA work for me, which he agreed. Later, we found out we had many similar experiences growing up and we both loved to watch movies and still go together weekly. Although Leo has a rough past he is well respected in the native community. He is seen as someone who goes above and beyond helping someone in need.

Myer: I met Leo in June of 2017 while I was doing a summer internship in Lincoln, Nebraska with Vision Maker Media (VMM). One day, a co-worker invited me to have lunch at his hot dog stand.

A couple of days later, the people at VMM wanted me to come up with a few story ideas for me to do a short documentary throughout the summer. After narrowing it down to a couple story ideas, we decided it would be best to do something on Leo because of the recent actions he was taking both at Standing Rock and within the Lincoln community.

Vision Maker Media exists to serve Native producers and Indian country in partnership with public television and radio. Vision Maker Media works with Native producers to develop, produce and distribute educational telecommunications programs for all media including public television and public radio. Vision Maker Media supports training to increase the number of American Indians and Alaska Natives producing quality public broadcasting programs, which includes advocacy efforts promoting increased control and use of information technologies and the policies to support this control by American Indians and Alaska Natives. A key strategy for this work is the development of strong partnerships with tribal nations, Indian organizations and Native communities. Reaching the general public and the global market is the ultimate goal for the dissemination of Native produced media that shares Native perspectives with the world.