La Guardia Cross, a filmmaker and a rapper who once opened up for KRS-One, chronicles his journey to fatherhood with a lighthearted series on YouTube. He talks to his baby daughter, who may or may not understand him, while capturing her growth and evolving personality. He also documents his true partnership with wife Leah, whom confides about her battles with depression. But together this new family is learning what parenthood is all about.

Garland McLaurin is a Peabody-Award winning filmmaker; his love for storytelling comes from its power to artistically explore the complex and conflicting social and psychological layers of people and society. His current project "Pops," is a web-series exploring fatherhood for African American men funded by ITVS Digital and National Black Programming Consortium. He co-directed/produced the Peabody winning documentary series, “180 Days: A Year Inside An American High School and Hartsville” that aired on PBS. He served as co-cinematographer on Wes Moore’s Coming Back documentary series, highlighting veterans, and for award-winning documentary filmmaker Yoruba Richen's The New Black, which explores the fight for marriage equality in the African American community. His other professional credits include: field producing on CNN’s Black in America 4, producer/shooter for WAMU 88.5 American University, BET’s special “Homecoming: The Killing of DJ Henry”. Additional past digital media work includes work for Black Public Media, Time.com, New York Times video division and video editing at the National Geographic digital news division. 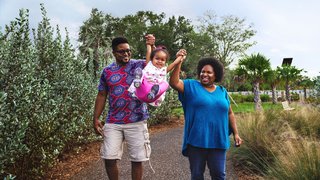 Read the full Q&AFilmmaker Garland McLaurin spoke with PBS about his time working with La Guardia Cross, Jr., and the mission behind "Pops."​

PBS: Can you tell us more about the background behind Pops and how you met La Guardia Cross, Jr.? What was it about his story that piqued your interest?

McLaurin: In early 2015, I was going to be a father if not for my partner miscarrying after three months. I immediately realized I was totally unprepared. Scared of my abilities to be a good parent, I began to contemplate what fatherhood looked like for Black men. I thought about friends and the general narrative surrounding Black fathers.

How does one learn to be a good father? Why does fatherhood seem to be at odds with the image of Black masculinity? Pops explores and reveals answers to these and other questions concerning parenting.

The goal of "Pops" is to contribute to the national conversation around fatherhood from the viewpoint of Black fathers.  In light of recent societal events and conversations concerning African American men, I want my project to inform and inspire a broader online media audience using entertaining and engaging storytelling.