Makana, a young Native Hawaiian man, struggles with his tenuous connection to his Hawaiian culture. When his girlfriend dies during childbirth, he is forced to complete a traditional indigenous birthing ritual with his girlfriend’s overbearing father. Together, they go on a journey that takes them down the long and winding roads of Hawaii island and up the tallest peaks of Mauna Kea in order to fulfill a promise and pave the path toward their uncertain future.

Bryson Chunis a 2016 Sundance Film Festival Native Shorts Lab Fellow. His film, Ka Piko, premiered at the Hawaii International Film Festival in 2017, where it was nominated for a “Best Short” award at the festival. Bryson has produced a wide array of award-winning short and feature film projects, including the film No More Aloha, which screened at the 2015 Raindance Film Festival in London and the feature documentary ‘Ike: Knowledge is Everywhere which ended its run of over 100 public screenings with a PBS broadcast. 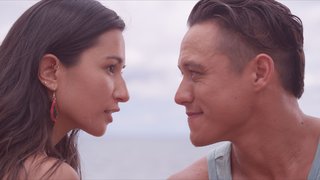 Read the full Q&APBS spoke with Writer and Director Bryson Chun about the representation of Hawaiian culture and identity through his film, and discuss how characters Bruce and Makana learn to cope with tragedy.

PBS: We see the tension between Makana and Bruce as they feud over a traditional indigenous birthing ritual in Hawaii. Can you tell us more about the history behind this?

Bryson Chun: The conflict between Makana and Bruce, to me, stems from an identity crisis of sorts that I think a lot of Native Hawaiians experience. What does it mean to be a Native Hawaiian in an increasingly contemporary Hawaii? Makana and Bruce represent a sort of duality of Hawaiian identity in that one of them practices a strict adherence to tradition, while the other lives a much more “contemporary” life.

Ultimately, I was hoping to illustrate that Hawaiians are not a monolith and I think Bruce and Makana are great examples of that. The piko burial in this particular case is a very specific tradition. After a baby is born, it is tradition for the piko, or umbilical cord, and sometimes the afterbirth as well to be buried in a place of significance to the child’s family. There are varying methods that are used, but the idea is the same; by burying a child’s piko, it connects the child to its ancestral land. In this film, Lake Waiau on Mauna Kea is the ritual location. Lake Waiau is an intensely sacred place because it is a representation of our creation gods. By burying the piko there, it connects the child to its ancestral land as well as to the gods.

Established in 1991, Pacific Islanders in Communications is a national non-profit media arts organization. PIC plays an important role in the preserving of Pacific Islander culture and collectively addresses the need for programming that shows America's growing diverse culture. PIC is apart of the National Minority Consortia.