I am a Refugee

There are 64 million refugees in the world today, individuals who are often invisible to us. Multimedia artist Ifrah Mansour’s work centers around the refugee experience. She recently read her poem “I Am a Refugee” at Twin Cities World Refugee Day, where these portraits were taken. In it she calls for greater acceptance and understanding. “Won’t you just let me find my humanity right here next to you?”

Ifrah Mansour is a Somali, refugee, Muslim, multimedia artist residing in Minnesota. She explores trauma through the eyes of children to uncover resiliency. She interweaves poetry, puppetry, films, and installations to illuminate the invisible stories of immigrants. Her critically-acclimated “How to Have Fun in a Civil War” premiered at Guthrie Theatre. Her first national museum piece; “Can I touch it” as part of “I am Somali” exhibit at Minneapolis Institute of Arts. Kate McDonald shot, directed, edited and produced this film. Her work has appeared on PBS NewsHour, Entertainment Weekly,and National Public Radio. At Twin Cities PBS, she works for the award-winning show “MN Original” and is the series producer for the multimedia series “Art Is...” She recently produced the feature length film, “The Seeker," starring Josh Radnor ("How I Met Your Mother"). She is the recipient of 6 regional Emmy Awards. 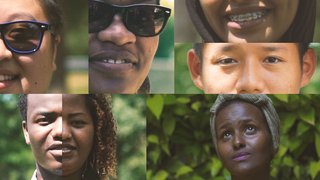 Read the full Q&APBS spoke with Author Ifrah Mansour and Filmmaker Kate McDonald about the shared experiences, hope and positive change from refugees across the nation.

PBS: Ifrah, can you tell us more about the history and origin story of your poem “I am a Refugee”? How did the concept of written word to film come to fruition?

Ifrah Mansour: When the Trump administration introduced the first Muslim travel ban, I got a lot of performance requests to share my reactions. I honestly didn’t know how to speak to something as so immediately felt by people around me, as my relatives’ arrivals to America got delayed and some of my student family’s reunion plans got changed forever. It seemed too easy to give in to despair. We live in a time where the seeds of hateful oppressions are being planted. But it's also a critical time to stand for our ideals and our values.

I finally wrote a poem responding to the ongoing global refugee politics that’s often harsh and dehumanizing. I wanted the poem to share the complexities and the contradictions of living in America while black, Muslim, immigrant, refugee and now people from banned countries. Still, I wanted a poem that listed all the blessings and the lessons refugees, immigrants and Muslims teach us. I was inspired by the new refugee that I work with as an educator. These new refugees always exude a mixture of hope and perseverance. There is this unapologetic strength of, “We’ve survived civil wars, famines and tyrants. We will get through this as well.”

Twin Cities PBS (TPT) is one of the nation’s leading public media organizations. Through the power of broadcast, digital, and local and national engagement, TPT advances education, culture, and citizenship to enrich lives and strengthen communities. TPT has been recognized for innovation and creativity throughout its 60-year history, receiving numerous Peabody, and national and regional Emmy awards. Based in St. Paul, MN, TPT is one of the highest-rated PBS stations in the country, reaching more than 1.3 million households each month through multiple broadcast and digital services. TPT’s areas of focus include: unleashing children’s love of learning; advancing STEM education; engaging first-stage adults; connecting communities to arts, culture and history; and serving the needs of America's aging population. Rewire is a national public media initiative that offers smart, fresh, original, thought-provoking content that inspires individuals to make their lives better.