Two down-and-out foodies meet for the first time and embark on an all night dining adventure through Sapporo, Japan in search of self-acceptance and love.

Justin Ambrosino is a graduate of the American Film Institute, New York Foundation of the Arts Fellow, Sapporo Artist-in-Residence and a Kyoto Filmmaker Lab Fellow. As a writer-director-producer, Ambrosino’s highlights include the short film,“The 8th Samurai”, which qualified for the Oscars in 2009, "Hungry for Love", shot in Japan, which won the Grand Prix at the Shaded View on Fashion Film Festival in 2016, presented by president Jean Paul Gaultier, and his current short film, "First Samurai in New York," which is touring festivals worldwide in 2018. Ambrosino has also volunteered at the Ghetto Film School in the Bronx as well as the AFI / White House Student Film Festival as a mentor. 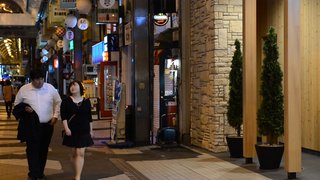 Read the full Q&APBS spoke with Writer, Director and Producer Justin Ambrosino about how his life experience with food and loved ones has inspired his films.

PBS: During this film, we witness Yuki and Miho form a bond over their shared love of food. What was the inspiration behind this unique romance?

Justin Ambrosino: Growing up working at my father’s Italian restaurant in New York I saw everything from young lovers proposing over spaghetti alle vongole to seasoned lovers cheating on their significant others while sharing a zabaglione. Believe it or not, I even saw someone get beat over the head with one of those large, wooden pepper grinders. Food always seemed central to the stories I’d see and hear and it became a personal passion of mine. When I’d wake up, I’d talk about breakfast. With breakfast, I’d talk about lunch. During lunch, it was all about dinner. And at dinner, it was "What are we going to eat tomorrow?!" Until the issues of health, weight and body image began to attack my passion.

My family and I battled diabetes, heart attacks, weight gain and extreme loss. For a period, I questioned my passion, but in the end, I couldn’t shake my love of all things food-related. My inspiration grew and stories came to me – revolving around food. With this story, I'm not interested in preaching life lessons about food consumption, nor do I judge my characters on how they behave. Instead, I wanted to explore a different side of the food/health issue by showing what it means to have a true passion for eating and finding someone who understands that. We all need that special someone who lets us love in abundance.