Anais, a young Costa Rican girl, faces the hardest decision she's ever had to make: should she sneak her best friend and pet turtle Tiku across the U.S. Miami border, or should she leave him behind? Anais’ relationship to the natural world around guides her through this heart wrenching decision, and the consequences that follow.

Pamela Maria Chavez is a Costa Rican illustrator and animator influenced by contemporary issues impacting communities of color. She primarily focuses on issues affecting young peoplewho struggle to find hope in tumultuous circumstances. In her work, Pamela hopes to highlight the resilience and beauty that rise from these uniquely important experiences. She’s influencedby the Chicanx/Latinx feminist legacy of live action filmmaking, hoping to take what she’s learned and apply it to the world of animation. She loves the tangible, tactile storytelling techniques of stop-motion and 2D animation, but also enjoys traditional arts such as painting. Pamela has a BFA from the Rhode Island School of Design and also holds a degree in American Studies from the UC Santa Cruz. After a brief stint as a youth advocate and organizer, she now relies on the redefining powers of visual media to create a change in this world. This is Pamela’s first major animated film. 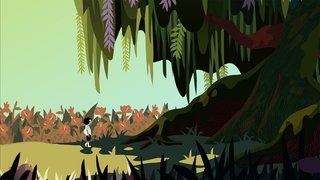 Read the full Q&ACaracol Cruzando tells a delicate story of immigration. PBS spoke with Writer, Director and Lead Animator Pamela Maria Chavez about why she decided to tell this story from a child's perspective.

PBS: What inspired you to tell this story through animation and from a child’s perspective?

Pamela Maria Chavez: I was inspired by a desire to tell this story from a perspective within me that I felt I hadn’t tapped into. As an artist, I’m always challenging myself to think of new ways of describing my feelings, of telling a story, of sharing an experience. The challenge for me was to tell this story without projecting my own adult feelings onto it. My inclination (rightfully so) as an adult is politicize, rationalize, and defend the position of my family’s status and the status of so many immigrant families within the U.S.

We’ve seen the dehumanizing rhetoric, the polarizing politics; I wondered, is there a way to re-humanize without picking the conversation up from this negative paradigm? How do I take control of my narrative again? By telling this story from a child’s perspective, you have an opportunity to look at the motivations and implicit qualities that are required to make this journey - something genuine and authentic. I also wanted to make something fun, funny and playful. This eases the tension in the film, and I believe allows an entry point for children and families to talk.

I want to tenderly open this conversation up to children. I want to give a platform for children who may have immigrated to see themselves in this story. I want a child who may not know what immigration even means to begin asking questions about borders, about equity. It’s inspiring to think about what children and families will do with this story. It might not be easy — we aren’t used to prioritizing the voices and thinking of children, and we stop ourselves because it’s complicated and full of hard topics — but I believe we have a lot to learn from this exchange.

Latino Public Broadcasting is the leader of the development, production, acquisition and distribution of non-commercial educational and cultural media that is representative of Latino people, or addresses issues of particular interest to Latino Americans. These programs are produced for dissemination to the public broadcasting stations and other public telecommunication entities. LPB provides a voice to the diverse Latino community on public media throughout the United States.