The Mauli Ola Foundation found an impressive way to not only help children with cystic fibrosis, but let them have fun while doing it. The foundation organizes events in which professional surfers teach children with cystic fibrosis how to surf. The saline found in the ocean, is a natural treatment for children living with the disease. Through the foundation's surfing program, the Montelone children have developed a deep love of surfing.

Breathe Life follows the Montelone family, also known as the “Brady Bunch” of the cystic fibrosis world, through their hospital visits, treatments, and surf sessions. The Monteleone family consists of Rob and Paulette and their five children. Michael, the oldest child, is nine years old and is affected with cystic fibrosis. Brooke and Brian are eight years old and are twins, Brooke has CF and her twin Brian does not. Gavin and Gracie are 6 year old twins, Gavin has cystic fibrosis and Gracie does not. The Montelones prove that nothing, not even a life threatening disease can come in the way of family. The filmmakers aim to raise awareness of the disease and support for the Mauli Ola Foundation, as well as the healing power of the ocean surf. 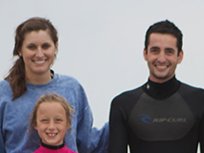 Samantha Andre is the co-director and editor. From Northern California, Andre has a passion for social issue documentary filmmaking.

Carly Berryhill is also a co-director and cinematographer. From Austin Texas, Berryhill has experience shooting documentaries in locations across the globe such as Ghana and Kilimanjaro.

Matthew Jekowsky is a co-director and producer. From Northern California, Jekowsky is an experienced producer currently working in television based out of Los Angeles..

PBS SoCal is the primary PBS station for Southern California, dedicated to entertaining, educating, and enlightening the greater Los Angeles community. The station's mission is to interactively educate and enlighten the community.

In January of 2011, KOCE-TV became PBS SoCaL, the full-service PBS station to the Los Angeles Market. Under the name PBS SoCaL, the station has expanded it's program schedule, viewing area, and community outreach for Los Angeles, Orange County, the Central Coast, the Inland Empire, and the Desert Cities. Learn more at pbssocal.org.