Total Eclipse of the Heartland Q&A 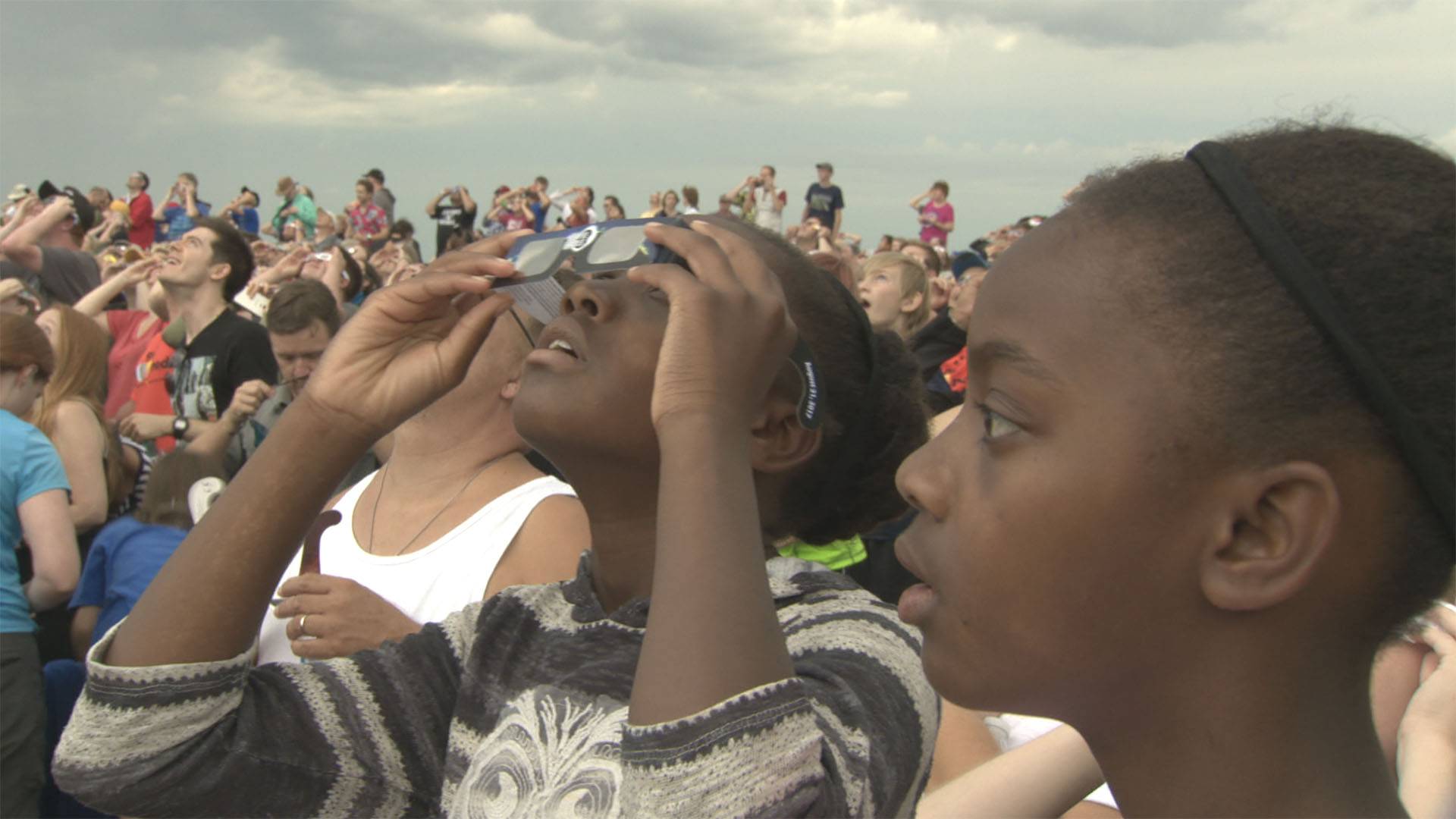 360-degree video has become an important part of modern day storytelling. PBS spoke with Executive Producer Chad Davis and Producer Brian Seifferlein about what drove their choices in the use of this technology, as well as their film locations, to document the Great American Eclipse.

PBS: What inspired you to shoot this event in 360?

Chad Davis: The funny thing to me about the success of this piece is that I had initially ruled out our team even covering the eclipse. Our department exists to experiment with new forms for content creation and distribution, and while other departments at the station had good ideas for coverage, I couldn’t see a hook that made sense for our Emerging Media department. Add to that the possibility that the whole thing would be stormed out, and and the risk didn’t seem worth the reward.

So kudos to Brian. He found a video on YouTube of a filmmaker capturing a 2016 total solar eclipse in Indonesia with a 360 camera. We had just begun heavily experimenting with 360 video that year and, based on the shadow on the ground in the shot, Brian deduced the guy in Indonesia used the same GoPro Omni rig that we had been using for our experiments. Brian was also really taken with how the crowd reacted to the eclipse.  Once we could tell that there was a reasonable chance to actually get usable footage from the event we realized we had a great hook for an experiment: What if we could give viewers the chance to experience the total solar eclipse over and over again as if they were there with thousands of people?

"Nature is putting on this once-in-a-lifetime show and people supplemented with fireworks. It felt very American."

Brian Seifferlein: “The Great America Eclipse” was a communal event like no other for the state of Nebraska and for the nation. Moving directly across the United States on a Northwest-to-Southeast trajectory, Nebraska sat right in the path of totality. It was the largest tourism event in the state’s history, drawing people from bordering states and around the world. The events were large and small, some crafted in the spirit of a hometown festival, and others – like those at the Homestead Monument of America – were planned years in advance and drew science celebrities like Bill Nye. We knew this event could capture something ancient in the human spirit, millions of eyes pointed upward for one moment in time, together, through darkness and light.

The Emerging Media Department at NET had only a few 360-degree videos under its belt at this point, but we were acquiring new gear and starting to understand the post-production process. I pitched the idea to Chad and he initially hesitated. I figured, “Well, I’m going somewhere that day, and I’m taking a camera (be it 360 or not) come what may.” Even I wasn’t taken with the idea of seeing an eclipse in 360, I figured the sun would take up mere tens of pixels in a sphere of thousands.  But all around me, in my personal life, the world was abuzz; “Where will you be?  What are you doing? We’re going to a place guaranteed to have the most time in totality!”  How could we miss this event? That’s when I realized – focus on the humans and their reactions, not on the sun. I sold Chad on an idea of excitement, of an experience that begs viewers to look around at people, and do less looking up at the sky.

PBS: The film takes us to numerous locations in Nebraska where people began to gather for the solar eclipse. Can you take us behind the scenes and tell us more about what went into the production of this film?

Chad: A lot of anxiety! And a lot of teamwork. While Brian and I are the names on this piece for [the PBS Online Film Festival], there were a dozen people total contributing in the field or in post-production. This would definitely have not been a success were it not for the whole team contributing their best thinking. 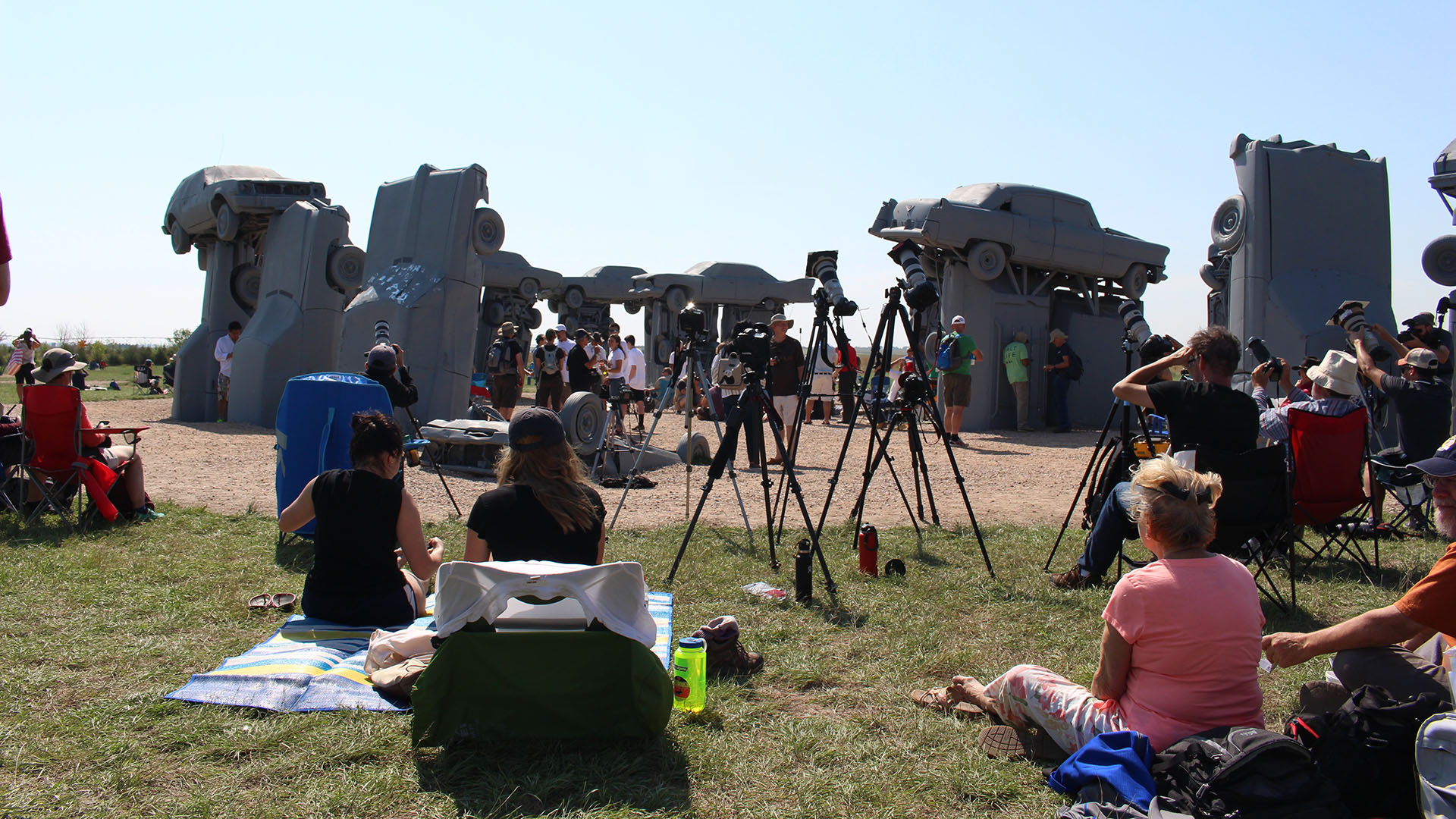 Once we made a commitment to cover the eclipse, we were all-in and the scope of the production grew quickly. There’s a really rich creative community here around the University of Nebraska – Lincoln (UNL) and we starting calling in folks we knew had 360 cameras or 360 experience. Even though we only used six cameras in the final edit, we had eight cameras in the field and two in the air. One of the cool things about this project was that we got to experiment with 360-drone photography courtesy of Ben Kreimer, a cutting-edge freelance journalist based here in Lincoln. (For those wanting to geek out on the tech, we used the GoPro Omni and Nikon KeyMission in Homestead, Kodak CoolPix on the drone, Z-Cam S1 at the baseball game, and Z-Cam S1 Pro at Rowe Sanctuary.)

The day of the eclipse the weather was obviously dicey. We knew we were fine out in western Nebraska but mid-state (where I was) and east (where the bulk of our cameras were set up) it was cloudy and raining. By mid-morning I knew I was in the clear but, as the film shows, it was touch and go until the end for most folks in Nebraska.

But for all the pre-production anxiety, the hard part was post-production and trying to glean the story from all the footage. That’s nothing new in filmmaking and the story, of course, seems obvious now, but we spent a lot of whiteboard time moving segments around and trying to figure out the right shots so that it flowed well.

Brian: We wanted to capture the full breadth of a “Nebraska eclipse.” This meant going to one of the largest events, at a National Monument where the first homestead claim was filed, as well as to quiet places, where only the birds and the river witnessed the event. The shooting (in retrospect) was the easy part. We simply talked ahead of time about where we wanted to be, where we needed to be at certain times to get the shot we wanted and geared up!

We deployed a team of 10 people at places throughout the state. Some venues had multiple cameras and people, and others (like Carhenge and the Platte River) had one person. The Homestead Monument had a crew of three people with multiple cameras.

In post, we really pushed the ideas of the new medium. I wasn’t sure we could jump throughout location-to-location and back again without completely confusing the viewer. Initially, we released single-camera experiences for social, just a shot and the moment, and let them play out. Then, we began experimenting with the voice of Bill Nye from that day. He speaks so well to the communality of the experience - that this is a singular lifetime experience which should help unite us in the recognition we are all here together on one planet under one sun.

Once we had this narrative set, we began seeing if we could bring out the real driver of drama that day: the weather. Did we have enough moments to make everyone understand that this key moment was so near to being quashed by clouds, dashing the hopes of thousands at Homestead National Monument? Chad, who had nary an idea of drama with the clouds at his clear location in the center of the state, had initially worried this project could’ve failed based on weather alone. Why not now delight in that drama in the editing suite?

It is worth noting that 360-degree video technology and production has evolved so quickly in the time since the video’s release, we wish we had the chance to do it again!

PBS: What was it like to witness such an extraordinary event and to see the reaction of everyone around you during the making of the film?

Chad: I think Brian and I had two very different experiences. Brian ran the crew at Homestead National Monument with all of the crowds, while I went solo out to the Rowe Audubon Wildlife Sanctuary near Gibbon, Nebraska. I found a nice secluded spot by the river without people around. But even at that, when totality occurred I could hear people cheering off in the distance. And fireworks. That cracked me up. Nature is putting on this once-in-a-lifetime show and people supplemented with fireworks. It felt very American.

Brian: I was stationed at Homestead National Monument where it was estimated the crowds were as big as 6,000 people. Bill Nye was a big draw. There were musical acts and guest speakers on a stage, along with a concert-like atmosphere. I had my moments of wanting to be where Chad Davis was positioned – tucked in along the quiet of the Platte River, nary a soul around.

Meanwhile, I was attempting to shoot some traditional video along with 360-video, fighting crowds and swearing off clouds. It felt miserable and overwhelming. But, there was a moment, (you can see it in the video) when the clouds parted and the crowds cheered in unison. Children held out their hands and screamed in delight, adults jumped up and down. It was beautiful. I did not see the eclipse for myself, because I was shooting, eyes buried in a viewfinder, but I did witness perhaps the best moment of humanity in my life. Watching the faces of others completely moved me. It still does today when I watch our video of it. I was completely thankful for the experience.