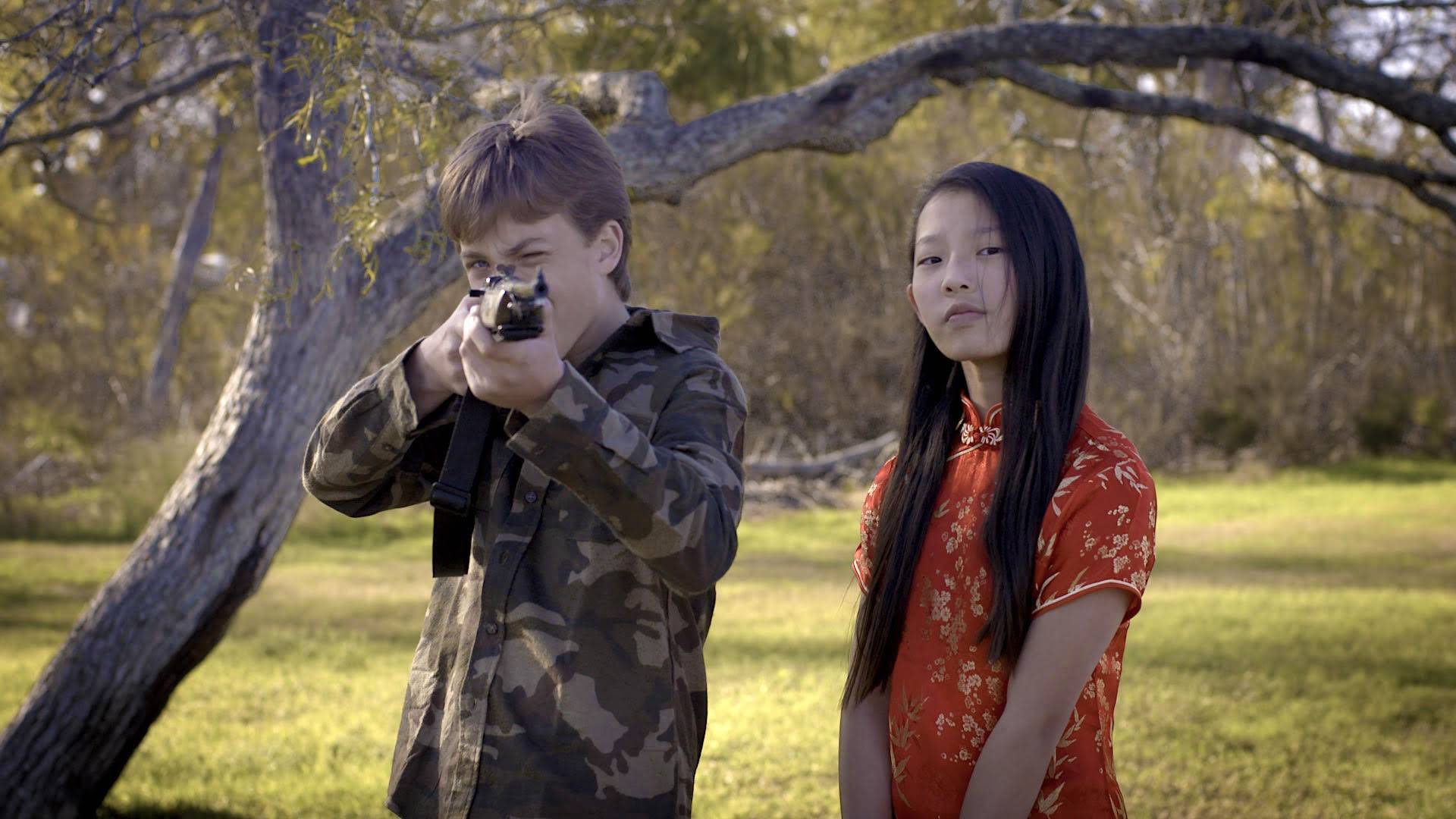 The Secession follows two young Texas boys on their mission to secede from the United States, and how they have to confront their prejudices on the way. Writer and Director Jay Hubert answered some questions for PBS about the message of his film and why he chose to use child actors to tell this story.

PBS: What was your motivation for using children to send the message that you did about acceptance of other cultures, ethnicities and so on?

Jay Hubert: Moving back to Texas for grad school after living abroad in Asia for most of the previous 15 years resulted in some challenging and narratively inspiring manifestations of reverse culture shock. Most notably, with all the attention the "immigrant crisis" was getting in the news, I was a bit disturbed at the negative stigmatization that had been attached to the word (and the concept of) immigrant, but thinking back to my childhood realized this had always been a tricky subject for Americans, and for Texans in particular.

I also had to laugh at the absurdity of the fact that as a kid growing up in Texas, the word immigrant was invariably linked to the word Mexican in my mind. With these thoughts bouncing around in my head, and with the media increasingly shining the spotlight on Texans signing petitions to secede from the Union under Obama’s administration, I came up with the idea of two young Texas boys armed with BB guns riding their bikes to the state capitol to secede. While I can't claim having attempted such a feat in my youth, given all the other ridiculous things I did as a kid growing up in Texas (often times involving BB guns and bikes, sometimes in wonderfully dangerous combinations), in some ways the events of this film are autobiographical in nature, and drawing on some of the crazy experiences from my own youth was a large part of the motivation to use children as the main characters of this film.

The larger motivation in telling this story through the eyes of children evolved from the idea that their opinions and views on the world are much more malleable than those of adults, and much more open to change. That’s why it’s so much more crucial that children have good influences and eye-opening experiences at a young age to help shape them into responsible and well informed adults.

The larger motivation in telling this story through the eyes of children evolved from the idea that their opinions and views on the world are much more malleable than those of adults, and much more open to change.

At the same time this film approaches this idea in a comical and satirical manner, showing how the biased views of adults can be greatly distorted and misunderstood when viewed through the filter of childhood naiveté. In seeing the childrens’ actions play out as an amplified manifestation of the desires of their adult idols, it’s much easier to show the absurdity of those desires than if the adults were the ones to carry out their plans themselves.

PBS: There’s a brief moment when you hear one of the men say, “Us hard-working white folks, we’re going to be the minority around here” and one of the boys says “good.” Later, when the men celebrate their plan to take over the capitol, the same boy jumps in celebration with his friend. Can you tell us more about this character’s role in the film?

Jay: The character of Andre serves the role of Tyler’s best friend and sidekick, and while he looks up to Tyler, he’s not always 100% on board with Tyler’s plans. Andre also has mixed black and white ancestry, and he hasn’t quite figured out his own sense of identity yet. While the influence of the black grandmother he lives with (who Andre mentions later in the film) can be seen when he roots for the idea of whites becoming a minority, he also is easily pulled into the excitement of the moment and spurred on by Tyler’s enthusiasm to join in the adventure of marching on the capitol. His enthusiasm quickly wains the next day though, and his character provides a strong contrast to Tyler and his strict adherence to his father’s views.

PBS: What was it like working with child actors? What was their reaction to the storyline of your film?

Jay: All three of the child actors I worked with on this project were phenomenal both in their acting performances and their work ethic. Jordan Elsass, who plays the role of Tyler, had the most acting experience of the bunch, and he knew how a set worked and what was expected of him, and he delivered incredibly well on his performances and far exceeded my expectations for the lead role.

Aidan Weatherford, who plays the role of Andre, was more of a wild card, as I had originally written the role of Tyler’s sidekick as a dim-witted white kid who sheepishly allows himself to be pulled into Tyler’s ridiculous plans. Seeing Aidan in auditions though, he had a natural wit and humor that really stood out to me, as well as an awkwardness that was incredibly endearing, and I could tell he had the potential to bring a lot to the sidekick role. So I cast him and rewrote the part for him, and I’m so glad I took that risk because he turned out to be brilliant in the role, and definitely added a lot more depth to the role of the reluctant sidekick, as well as a lot of humor to the film. What was really great to see is that Jordan and Aidan hit it off immediately at rehearsals, and were inseparable on set. There were so many times I would look over at them as the crew was setting up for a shot and see them horsing around, and wished that I could have just rolled the camera on them in so many of those moments as they naturally embodied the fun-loving, mischievous nature of their characters.

The most focused of the three child actors was Tasha Anslyn, who plays the role of Jenny. She’s an incredibly talented dancer and actor, though this was one of her first film roles, and she totally nailed the role of Jenny that I had in my head. She was also one of the best actors I’ve ever worked with in terms of taking feedback and making adjustments we discussed between takes, and I only wish that every actor I worked with, child or adult, was as easy to work with as Tasha. So in terms of working with these three child actors, I was truly blessed in that they were not only talented and hardworking, but they also took direction well and were truly a pleasure to work with.

One other important thing about working with child actors that is often overlooked is not the actors themselves, but their parents. I’ve had fellow filmmakers relate horror stories to me about having to deal with controlling and manipulative parents on set, and having parents like that on set can not only put a damper on their child’s performance, but on the morale of the rest of the cast and crew. And in that regard, I feel like one of the most fortuitous things that happened in casting this film is that on top of finding the right actors for the roles, all three of them had the most amazingly generous, cooperative and patient mothers I’ve ever met. They were so incredibly easy to work with, and all three of them did everything they could to make my job as easy as possible. I have to admit that I was a little worried about how both the child actors and their parents would react to some of the topics and scenes in the script, and the first thing I did after casting was to have both the actors and their mothers come in for a read-through of the script and address their questions and concerns. I was amazed at how mature all three actors were in discussing the topics and issues addressed, and in the end the few concerns that were raised about specific dialogue or actions were easily resolved.

I also asked the actors for their feedback on the script during that read-through, and I really appreciate how open and honest they were with me about how kids their age would say or do things in those types of situations, which helped me tremendously in my script rewrites. During shooting, Jordan, Aidan and Tasha handled even the most difficult of scenes and moments of dialogue with aplomb. The one scene that most concerned me was the moment where Tyler starts to make a move on Jenny while showing her how to shoot his gun, but there was neither the young teenage awkwardness or the nervous laughter to contend with when shooting this scene. Even between takes, Jordan and Tasha were focused, and felt and acted like two young people on the verge of having a sexually-charged encounter for which neither was ready. I truly lucked out with the casting of this film (including with the adult actors), and I can’t imagine pulling off a film like this without Jordan, Aidan and Tasha really stepping up in their roles. And I thank my lucky stars for their moms as well!

A story about two Texas boys, a secession, and egg rolls.