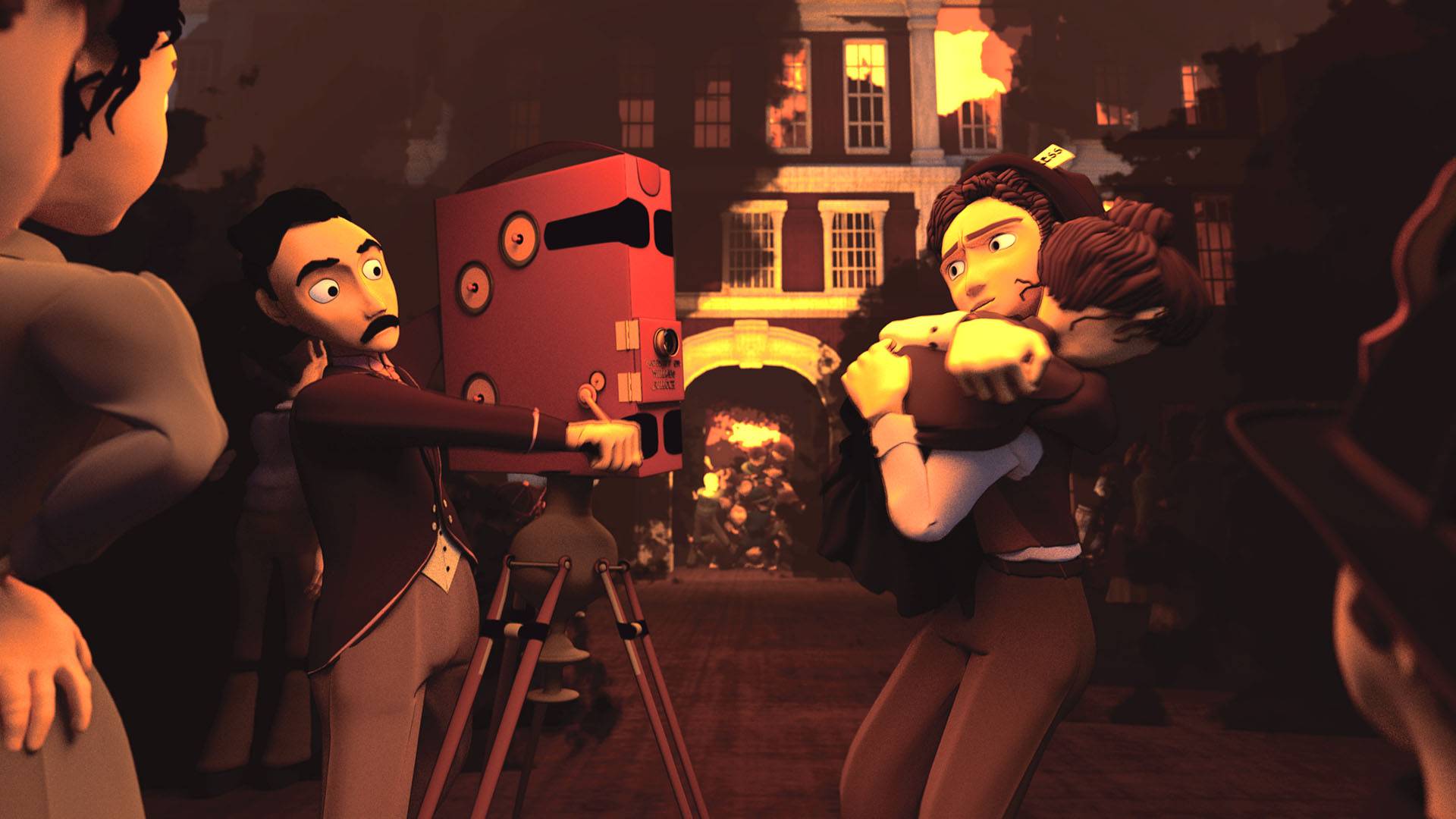 PBS spoke with Director Daniel Houghton about his unique take on a disaster film, and the origins for The Collinwood Fire.

PBS: How did you come across this story and why did you choose to use animation to share it? Can you tell me more about the process that goes into making an animation like this?

Daniel Houghton: I learned that a colleague at Middlebury College, Michael Newbury, was researching a turn of the century elementary school fire and found myself interested to discover what it might be like to animate this mostly forgotten event from American history.

After deciding to collaborate, our process involved a lot of conversations, first between the two of us and then with the small group of students who had chosen to work on the project as animators. Those conversations became the start of a long search for a structure for the animation. What images should we show, and in what order? What should we put right in front of the camera? What should we push to the side? Whose story should we tell? How well should we get to know any particular characters? As we spoke we built rough models of each idea and iterated on the models until the structure of the piece slowly emerged. So that and the actual work of building the animation lead to the finished product.

PBS: Why did you choose to forego dialogue in this?

Daniel: There are many reasons to forego dialogue in a short animation such as this. The event of the fire itself is so graphic and full of physical action that it doesn’t need dialogue to tell the core story beats. The newspaper headlines, drawn from real headlines of the event, that pop up all over the film gave us a way to tell bits of the story verbally without actual words coming out of characters’ mouths.

The drafts of the film that did involve dialogue started to open up story threads that were much bigger stories to tell than the short film that we were making. The viewers watching William Bullock’s moving-picture images of the disaster days after it happened would have seen a black and white silent film, with no dialogue. And the lack of dialogue can give a film an openness to interpretation that seems fitting for a disaster of this scale.

PBS: We see this story from the perspective of a journalist. Why did you choose to use this character to lead your story?

Daniel: The journalist is the definitely the heart of the story. It is primarily because of newspaper stories and photographs that evidence of this fire still exists. Moving picture film was a new medium in 1908 at the time of the fire. And the response, then and now, to moving-picture images of such tragedy is often one of distaste.

Even now when live video of disasters are a regular aspect of news coverage there is still a degree of discomfort that many people feel while watching those images. We seem both drawn to and repulsed by this sort of imagery. This makes it difficult for an audience to empathize with the young filmmaker in the animation.

Even now when live video of disasters are a regular aspect of news coverage there is still a degree of discomfort that many people feel while watching those images. We seem both drawn to and repulsed by this sort of imagery.

Something about his action of cranking the camera to make a movie of the horror seems more villainous and dark than the action of the news reporter taking notes even though both are there to make media objects out of tragedy for others to consume.

A news reporter and a filmmaker turn a 1908 elementary school fire into a media sensation.