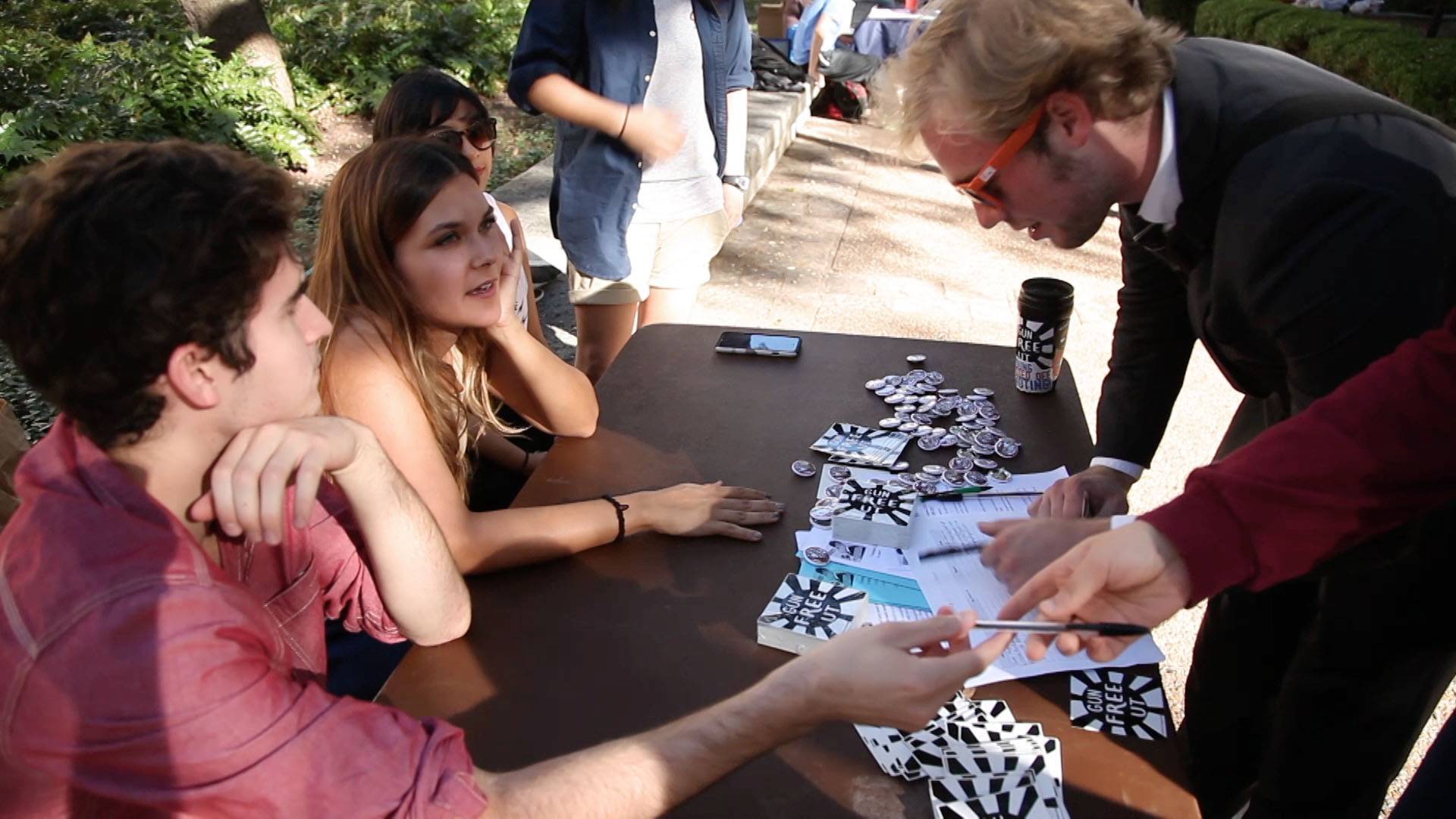 Producer Joanne Elgart Jennings spoke with PBS about Guns on Campus, taking us behind the subjects featured in her film and how she hopes this will impact discussion surrounding campus carry.

PBS: During this short, you interview individuals from the University of Texas at Austin, where the first mass school shooting occurred in 1966. How did you find the subjects for your film and what was the decision in featuring these specific individuals?

Joanne Elgart Jennings: I wanted to find engaging, sympathetic and credible characters on both sides of the issue. I saw a video of Nick Roland participating in a debate on campus from his vantage point as someone who had lived through the Virginia Tech mass shooting. That fascinated me and I wanted to talk with him.

As one of the leaders of Students Against Campus Carry, Ana Lopez was behind the “Cocks Not Glocks” protest, making the point that it’s illegal to openly brandish a sex toy in Texas, but that guns can be carried and displayed. That protest had gotten media attention. Ana provided a passionate voice to represent students worried about guns on their campus.

I also wanted to tie the current debate to historic events, so we talked with a few people who witnessed the first mass shooting in U.S. history at the UT Tower in August, 1966. Ramiro Martinez stood out. He had spent a long career in law enforcement after he helped bring down the Texas sniper in 1966.

PBS: You highlighted both sides of the campus carry law issue, revealing a neutral outlook on the issue. What is the overall message you want to send with this report?

Joanne: I wanted to try to make a film that would be as accessible to my family in Ft. Worth, Texas as it would be for my friends in San Francisco, California. I’m concerned about how toxically polar our public discourse has become. I hope that by exposing audiences to empathetic views of people on all sides of a contentious debate like guns on campus that it might inspire more civil and productive conversations.

I’m concerned about how toxically polar our public discourse has become. I hope that by exposing audiences to empathetic views of people on all sides of a contentious debate like guns on campus that it might inspire more civil and productive conversations.

PBS: Guns on campus is a widely debated issue in the U.S. and something we hear about quite often. Why did you want to cover this issue now?

Joanne: I produced this short to coincide with the PBS Independent Lens broadcast of "TOWER," a groundbreaking film by Keith Maitland, which artfully weaves rotoscopic animation with archival footage to tell the story of the the 1966 mass shooting at the University of Texas from the perspective of those who were involved. Ironically, Texas’s new law requiring all public universities to allow concealed carry of guns on campus went into effect on the 50th anniversary of that shooting, so it seemed fitting to explore today’s debate about guns on campus in the context and the very location of our country’s first mass shooting.

Guns on Campus is a short film by Joanne Elgart Jennings.