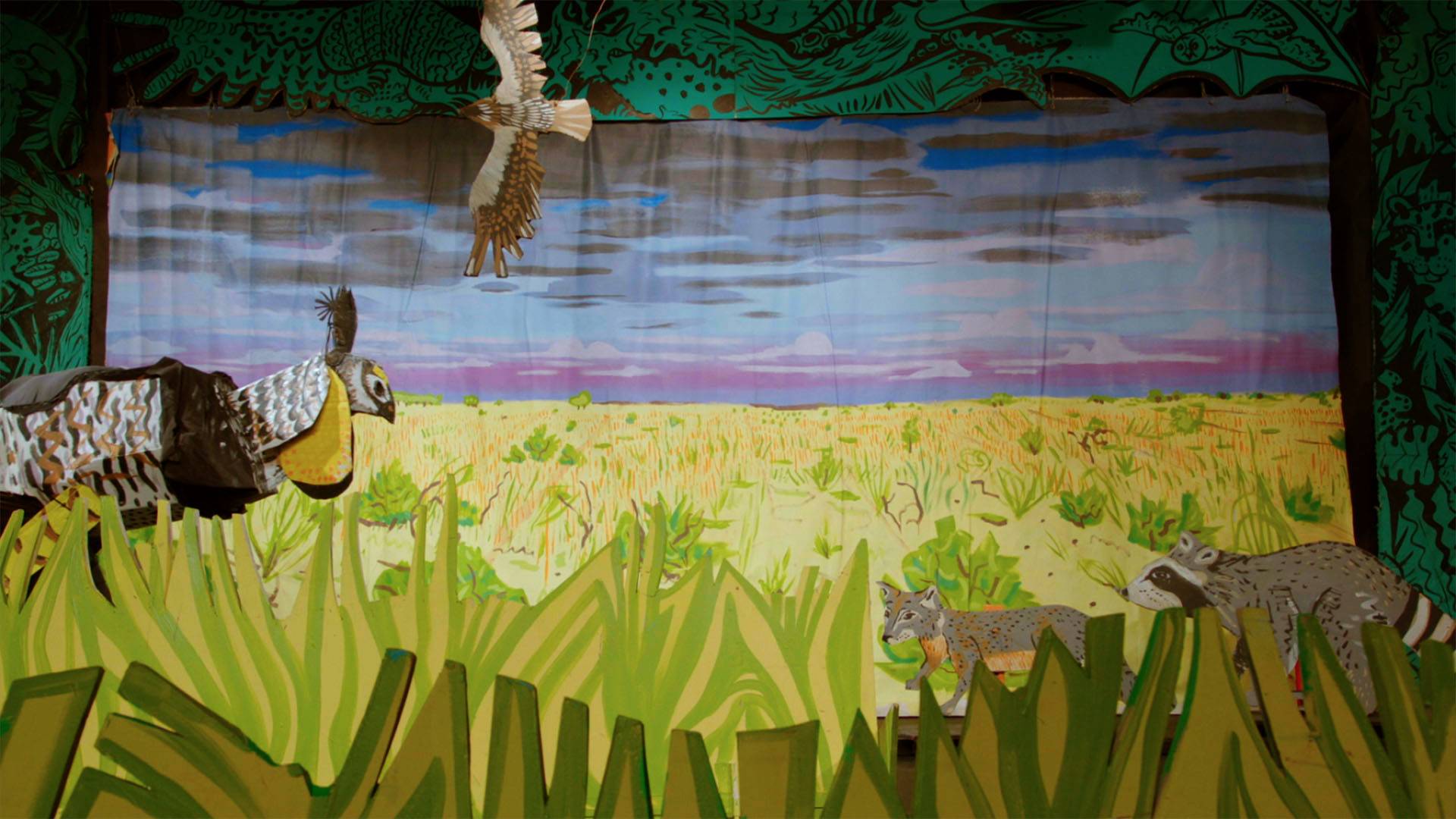 PBS spoke with Filmmakers Jules Buck Jones and Rachel Bardin about their inspiration for the puppetry, costumes and set designs behind this whimsical film.

PBS: This film introduces us to the Attwater Prairie Chicken and the Houston Toad. Though film weaves live footage of both of these animals throughout the narration, there’s a large use of puppetry to depict these animals. What was the inspiration behind this?

Jules Buck Jones: The original performance, called “The Biodiversity of Texas,” used puppets and costumes as the main visual vehicle. These were live performances, where the puppets were accompanied by narration and sound effects.

Rachel Bardin: The puppets bring out the sense of awe and wonder that we get in the presence of wildlife. The artwork and performances by Jules show enormous reverence for the animals because he has studied them so carefully. I wanted to create these connective moments in the film which bring us out of the dream of the puppet world to seeing the animals themselves.

"If we all make small steps in the right direction we can swing the current trajectory, but it will truly take a majority to work, so spread the word to your neighbors and friends."

PBS: Can you tell us more about the costume and set development?

Jules: The original performance was on a shoestring budget, so we had to be as resourceful as possible to showcase the six different ecosystems, and the 70 animals in our narrative. We also needed an efficient style in which to depict the backdrops and the animals due to time and workload.

So you get this hybrid language that is at once rough-around-the-edges but also attentive to details. A lot of the costume structures and paint jobs were improvised in the studio with minimal source material.

Rachel: We may or may not have gone dumpster diving for some of the cardboard. I love the very accessible materials used in the sets and costumes. There is a resourcefulness and playfulness that I find so charming. Although much of filmmaking is about maintaining illusion, I didn’t want to hide the strings or pretend that the raccoon wasn’t on a skateboard. 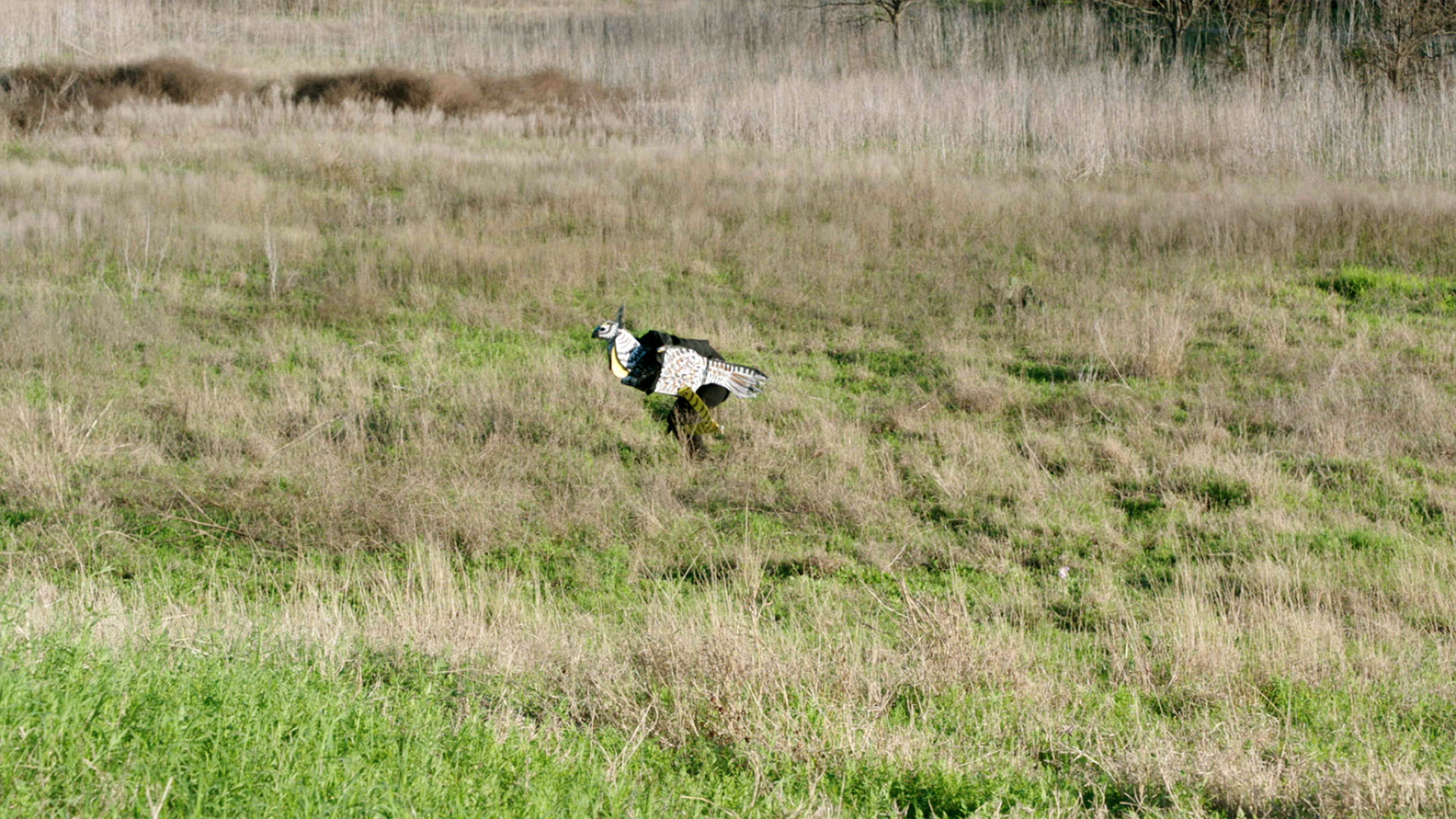 PBS: What can we do to help preserve endangered wildlife like the Attwater Prairie Chicken and Houston Toad?

Jules: Education has a role to play, but the lessons must go beyond learning about the issues. Unfortunately, conservation is a low priority and oftentimes an inconvenience to developers and politicians. Convince the powers that be, that these wild lands and wild species are important to us through voting, volunteering, donating, and showing up to direct action opportunities. Make informed decisions about the food you eat, the businesses you support, and the politicians you vote for. If we all make small steps in the right direction we can swing the current trajectory, but it will truly take a majority to work, so spread the word to your neighbors and friends.

Rachel: All actions we take will be an uphill battle if there isn’t a proper habitat for these animals to live in. If we allow species to get isolated to one or two preserves, which happened with Attwater Prairie Chickens, one catastrophe can wipe out an entire wild population. I advocate for civic participation like voting and engaging with representatives and making wild lands a higher priority. Private landowners and non-profits also play an important role. This all involves a lot of cooperation, patience and discipline from the public but it is one of the most important investments we can make. Creating large corridors of restored land benefits not only endangered species but also all life on Earth.