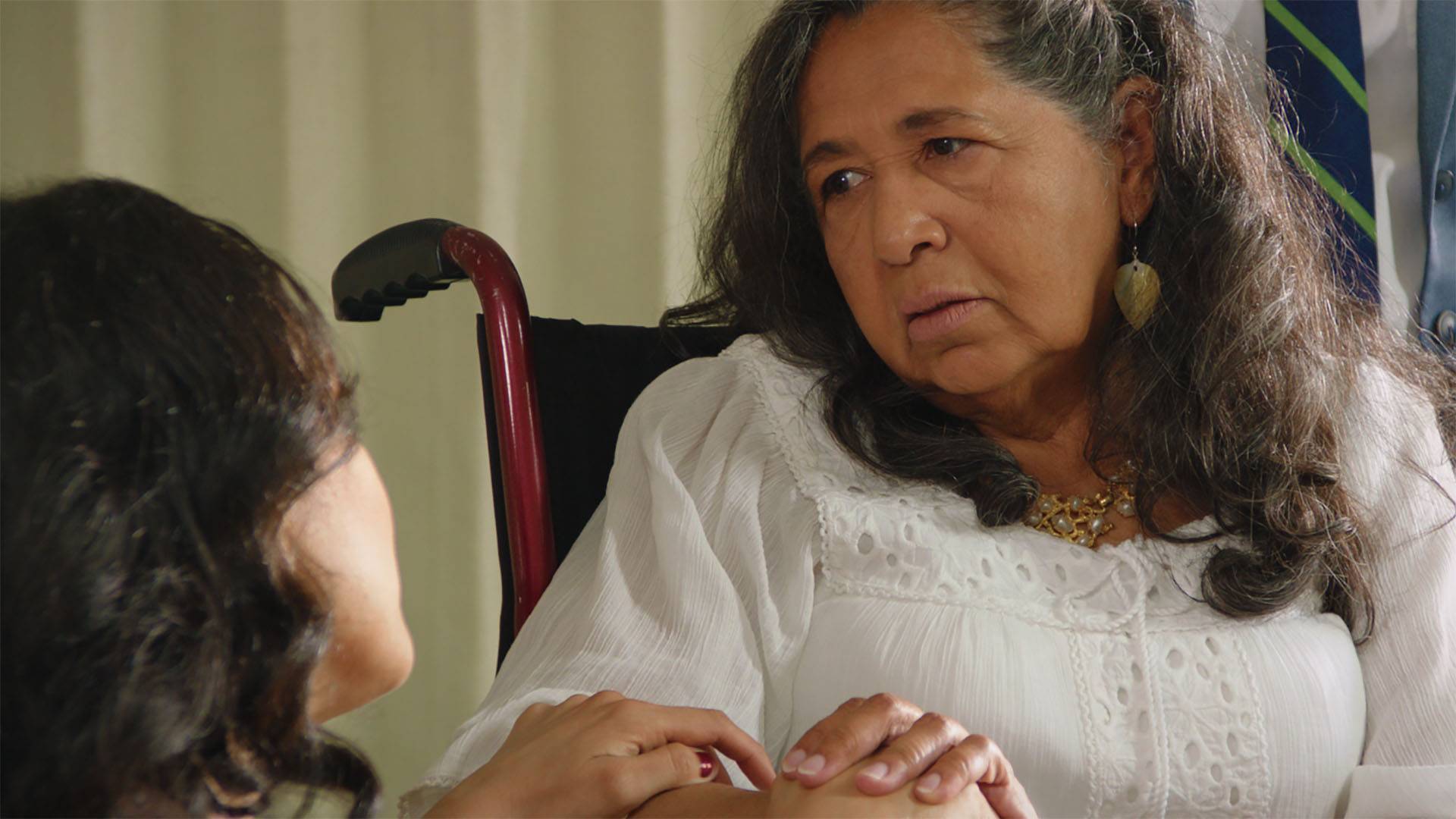 Amigas with Benefits tells a familiar story of coming out through the eyes of an elderly subject. Writer, Producer and Director Adelina Anthony spoke with PBS about why she chose to tell her story from this point of view.

PBS: There’s an interesting switch here from the stories that we hear about more often: someone of an older generation, more traditional, looking down on a gay youth. Here we see the reverse situation when the daughter opposes her mother’s same-sex marriage. Why did you choose to tell the story from this point of view?

Adelina Anthony: As a Xicana lesbian writer I’m always asking myself, "What kind of queer stories have I not seen on screen or on stage?" And by queer stories I’m also thinking about the Latinx protagonist/lead characters that I want to see driving the story. So if you look at mainstream LGBTQ and mainstream Latino/a stories, it leaves writers like myself with lots of room to explore. But the story challenge isn’t just about putting brown bodies where white and heterosexual bodies have historically occupied literary, theatrical or cinematic space — for me, the challenge is to tell a story we think we know in an altogether unique way.

But the story challenge isn’t just about putting brown bodies where white and heterosexual bodies have historically occupied literary, theatrical or cinematic space — for me, the challenge is to tell a story we think we know in an altogether unique way.

So, yes, in the typical coming out story, it’s an older traditional person looking down on a gay youth or young adult. But the truth is that people find their inner strength to come out at all ages. So when I combined 1) the insider knowledge of knowing Queer/Trans People of Color (QTPOC) who have come out much later in life and 2) the constant erasure in our society and media of our elders of color (especially queer)… the seed of Amigas with Benefits was planted.

I knew my protagonist, Lupita, was going to be a Latina lesbian elder who had been living in the closet almost all of her life. But living a lie has deep repercussions, and the story touches upon this. Even though Lupita’s daughter is written as the foil, and we had fun portraying her as a pseudo telenovela-esque character, her adult daughter is ultimately the consequence of Lupita’s closeted lesbianism over many decades. I have deep compassion for both of them. Ultimately, I hope it gives us all a chance to reflect on our learned homophobia, and to think more about marginalized peoples in our Latina/o/x and LGBTQ communities. To see the ill effects of asking people not to live their truth.

PBS: During the ceremony there are only four characters who really have speaking lines whereas the audience mostly remain silent spectators. However, when they do react, it almost feels like a studio audience. What was the purpose of their role in the film?

Adelina: Yes, like a studio audience, the elders in the ceremony were there to help bring out the best in the actors’ performances. But, unlike a general studio audience that doesn’t have a role in the story or a clear connection to the characters, this elder audience are residents of the senior home where the story takes place. They are there to support Lupita and Ramona’s union. For such reasons, I prefer to think of them as “community witness-participants.”

When the daughter disrupts the ceremony they serve as witness-participants: echoing the intended reaction from a non-homophobic standpoint. So the community witness-participants gasp, whisper, laugh, clap, boo and even engage in a collective act of community resistance to push the “bully” out of their space. In a way, they serve the story as a moral compass. In a much longer work or a series these community elders would have their own storylines or subplots. But one has to be economical in a short film, because there are only so many characters that can demand our attention.

That being said, I wouldn’t have crafted this story without the small elder audience, because it’s important to show that a senior residence can be a space of safety and community for QTPOC elders. In reality, the majority of QTPOC elders face homophobia from other residents and staff. This film offers a glimpse of what a progressive and safe senior residence can look like; but, also points toward the fragility of safe spaces when the structural power of any jurisprudence can be used to protect homophobic motives and policies.

PBS: You later shed light on Lupita’s dementia in the film, and when we see her in her room the camera pans to numerous paintings on the wall and religious imagery. What was the reason for doing this?

Adelina: Yes, Lupita’s dementia is real in the film, but we’re not made privy to how long she’s been dealing with it or how severe it is. But I liked the idea of someone’s failing memory also being a place of potential escape. This seemed potent and radical, especially because Lupita is bound to a wheelchair, but her mind is not. And who’s not to say that her spirit can’t abscond with her mind when the drama in the room becomes too intense? Regardless, in the film dementia poses a real problem for Lupita. But it shouldn't be used against her when she is clearly advocating for her rights from a place of reason and lucidity.

Lupita’s entire room is an interplay of imagery related to identity, freedom and oppression: horses, indigenous faces, female cowboys, la Virgen de Guadalupe and a rosary. Our personal, cultural and political freedoms reside in our deconstruction and reconstruction of this kind of imagery, because it points to the complicated and ongoing process of colonization. We are constantly being asked to forget our indigenous selves. The imagery is there for us to ask what role religion plays in silencing our Native selves, as well as our Two Spirit/queer and womyn selves. And while it’s not explicitly explored in the film, when a person comes out the first thing that a homophobic society does is make her/him/them devoid of any faith. But that journey of finding our spiritual path is for each of us to claim or reject.

QTPOC are peoples of varying degrees of faith, as well as agnostic or atheists. Regardless of someone’s religion, I’m always more concerned if the person is decent, kind, loving and respectful of others and this planet in both their speech and actions.

Note: The artwork from Amigas with Benefits is from the film's spiritual elder on set and visual artist, Nancy Chargualaf Martin.

An elderly bride-to-be nearly has her wedding day ruined by an uninvited guest.